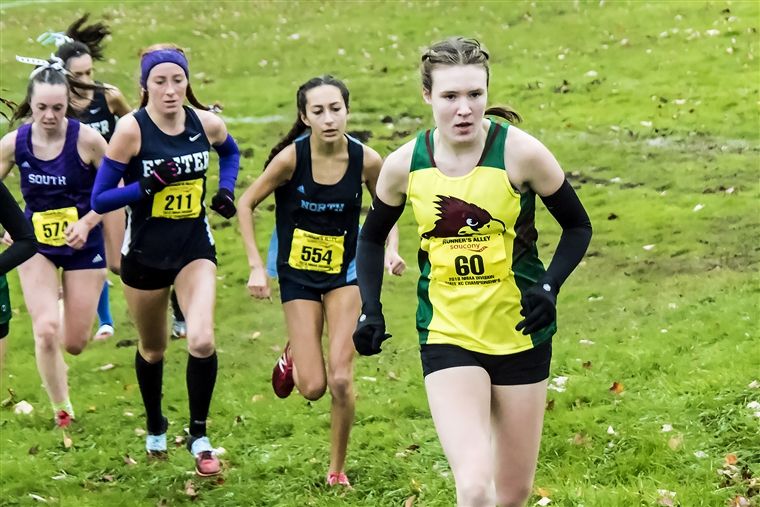 The 5-foot-8 senior broke the tape at the New Hampshire Meet of Champions, clocking a 17:55.30 to finish nearly five seconds ahead of her next-closest competitor. Fischer also ran the fastest all-divisions time of the day in winning the Division 1 state tile, breaking the tape in 18:16.50 and leading the Cardinals to a second-place finish as a team. Bishop Guertin was also runner-up at the MOC. Fischer still had enough in the tank to take seventh (18:47.0) at the New England Cross Country Championship, lifting the Cardinals to 7th place showing. Also the 2019 NHIAA Girls Cross Country Runner of the Year, she is a 16-time All-State honoree between track and cross country, and has received All-New England recognition four times. Her athletic resume is all the more impressive given that she competes despite dealing with chronic Lyme disease.

A member of the Cardinals’ Nordic ski team, Fischer serves on the leadership team of Bishop Guertin’s Campus Ministry, helping to organize high school masses and performing community outreach. Also a eucharistic minister at the high school and at St. Marie’s Catholic church, she has donated her time as a preschool religious education volunteer in the Seeds/Promises program in addition to volunteering on behalf of local road races. “Caroline is a tremendous athlete and won five of the seven races she entered this past fall,” said Erik Boal, editor for DyeStat.com. “Her fastest all-class time at the divisional meets plus her Meet of Champions title put her over the top.”

Fischer has maintained a 3.86 GPA in the classroom. She has signed a National Letter of Intent to run on scholarship at Providence College this fall.

As a part of Gatorade’s cause marketing platform “Play it Forward,” Fischer has the opportunity to award a $1,000 grant to a local or national youth sports organization of her choosing. She is also eligible to submit an essay to win one of twelve $10,000 spotlight grants for the organization of choice, which will be announced throughout the year.

Since the program’s inception in 1985, Gatorade Player of the Year award recipients have won hundreds of professional and college championships, and many have also turned into pillars in their communities, becoming coaches, business owners and educators.

To learn more about the Gatorade Player of the Year program, check out past winners or to nominate student-athletes, visit www.Gatorade.com/POY, on Facebook at www.facebook.com/GatoradePOY or follow us on Twitter at www.twitter.com/Gatorade.
Back
Bishop Guertin High School
194 Lund Road Nashua, NH 03060
Phone: (603) 889-4107
Bishop Guertin High School is a private, Catholic, coeducational, college-preparatory day school for grades 9-12, located in Nashua, NH.